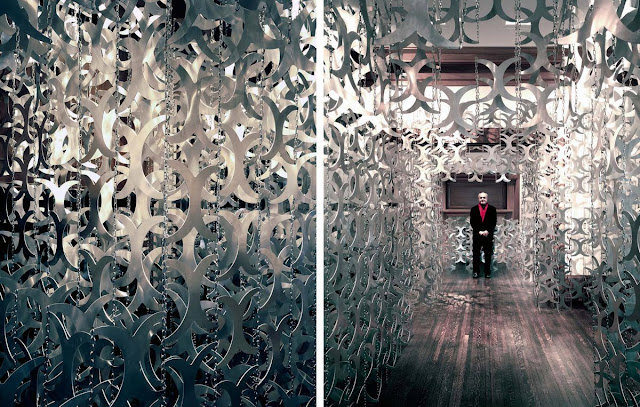 "…the informal steps in easily, a sudden twist or turn, a branching, and the unexpected happens – the edge of chance shows its face. Delight, surprise, ambiguity are typical responses; ideas clash in the informal and strange juxtapositions take place. Overlaps occur. Instead of regular, formally controlled measures, there are varying rhythms and wayward impulses. Uniformity is broken and balance is interrupted. The demand for Order! in the regimental sense is ignored: the big picture is something else..."

DEFINITIONS (extracto)
Algorithm: A geometric or arithmetic rule that is repeated.
Chaos: A mathematically determinate state of turbulence. (The same start point, subjected to the same mathematical method, produces an identical result to the same extent of calculation, however unpredictable the process.)
Probability: A structure governed by chance. Its diagrams, in the manner of trees, are serial bifurcations.
Dimension: A measure of space in whole integers. In our perception there are the 3 dimensions of line, area and volume. In design space and mathematics there are n-dimensions.
Fractal: A non-integer dimension of pattern. The coastline is of a fractal geometry. A fractal has infinite range of scale.
Geometry: A mathematical description of space - a local concept.
Topology: The study of continuity - a forensic of connectivity.
Sequence: An array of independent entities.
Series: A progression of related entities.
Matrix: An arrangement in rows and columns of events or values that act simultaneously.
Equilibrium: A stable relationship of forces about a point of symmetry.
Coherence: The connecting of separate equilibriums.
Emergence: The internal will of chaotic systems to reach coherence.
Dynamic symmetry: Instantaneous balance about a moving point.
Static symmetry: The balance of shape or force about a fixed point or line.
The Argand plane: A plane of complex numbers with the horizontal axis as real numbers and the vertical axis as imaginary numbers.
Linear: The assumption of adjacency as a direct causal route.
Pattern: A set of marks that have abstract powers.
Network: The joining up of pattern, with function – a star map - a road map - a molecule.
Scale: Measure that gives meaning to both network and pattern.
Formal: Platonic ideal reduced to a set of rules.
Informal: The non-linear characteristics of design.